In Bhutan, they don’t bother with measuring Gross Domestic Product – they measure their success in happiness!

The term “Gross National Happiness” or GNH was coined in 1927 by Bhutan’s Fourth Dragon King. It was a measurement of collective happiness of the nation in contract to the Western means of measurements – Gross Domestic Product (GDP). GDP measures the market value of all final goods and services produced by a nation in a given period. GNH more adequately reflected an economy based on Buddhism, largely uninterested in material possessions.

So how to you measure “happiness”?

Turns out, it’s more quantifiable than you might think! Bhutan’s Gross National Happiness Index is used to quantify how happy a nation is based on the following:

This makes sense. When we have services available such as good healthcare and education; when we have a rich cultural environment with art galleries and museums celebrating our way of life; when we live in a healthy natural environment, surrounded by leafy trees and happy animals and when we trust that our government, which is stable, acts responsibly and represents our interests, we feel good. Achieving these things is by no means an easy task, particularly for a developing country.

While Bhutan has many challenges, including widespread poverty and food security, the way they are measuring their success is quite revolutionary and there is something we can learn here. While we seek to increase our GDP, ultimately our aim is the happiness of our citizens, but we forget this and shortsightedly plough on seeking increased production and wealth.

The United Nation’s 2016 World Happiness Report was released earlier this year and explored similar measurements.  It found that there wasn’t a particularly strong correlation between salary and happiness (or wellbeing) and that things such as: freedom to make choices, perceptions of corruption (in government and business) were very important factors. This report suggests we should “change the focus from income inequality to well-being inequality.”

“Targeting the non-material sources of well-being, which is encouraged by considering a broader measure of well-being, opens possibilities for increasing happiness while simultaneously reducing stress on scarce material resources.”

We can’t forget to to stop and measure our “happiness levels” as well as our GDP. “One of the side benefits of broadening the focus of policy attention from income and wealth to subjective well-being is that there are many more options for improving average happiness, and increasing equality by improving the lot of those at the bottom, without others being worse off.” What gets lost along the way in our current measures of the success, is the reason we’re seeking to increase our GDP and “wealth.” Wealth is a means to an end, not an end in itself. A nation needs a strong and stable economy to maintain social services and levels of safety and all the things that the UN has listed which makes citizens happy. But if a nation is unhappy, then despite any amount of wealth or services, the government has failed its’ people. 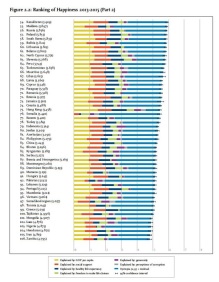